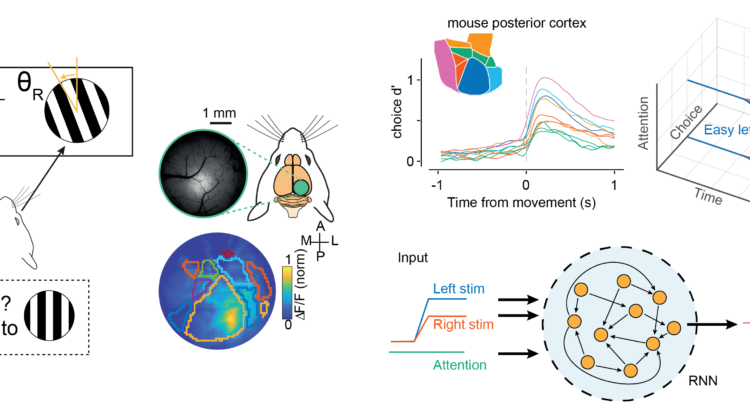 Choice information appears in the brain as distributed signals with top-down and bottom-up components that together support decision-making computations. In sensory and associative cortical regions, the presence of choice signals, their strength, and area specificity are known to be elusive and changeable, limiting a cohesive understanding of their computational significance. In this study, examining the mesoscale activity in mouse posterior cortex during a complex visual discrimination task, we found that broadly distributed choice signals defined a decision variable in a low-dimensional embedding space of multi-area activations, particularly along the ventral visual stream. The subspace they defined was near-orthogonal to concurrently represented sensory and motor-related activations, and it was modulated by task difficulty and contextually by the animals’ attention state. To mechanistically relate choice representations to decision-making computations, we trained recurrent neural networks with the animals’ choices and found an equivalent decision variable whose context-dependent dynamics agreed with that of the neural data. In conclusion, our results demonstrated an independent decision variable broadly represented in the posterior cortex, controlled by task features and cognitive demands. Its dynamics reflected decision computations, possibly linked to context-dependent feedback signals used for probabilistic-inference computations in variable animal-environment interactions.

You can check the preprint here.